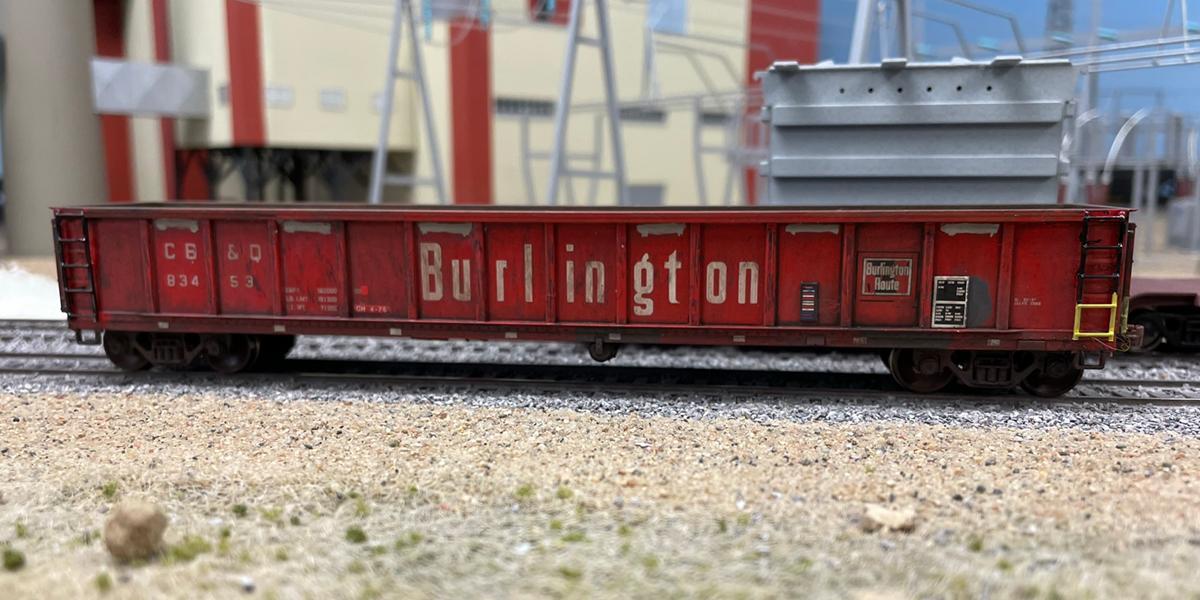 An Article by Michael Farley

I model the Burlington Northern Railroad around 1978 within the communities of Bismarck and Mandan, ND, as well as the branch line from Mandan up to Killdeer, ND. Modeling the BN in the 1970s is really modeling five railroads. There’s equipment that is purely Burlington Northern purchased or built after the merger. Then there are four predecessor roads, the Great Northern, Northern Pacific, Chicago, Burlington, & Quincy, and the Spokane, Portland, & Seattle. The GN, NP, and CB&Q all had prolific car shops that built cabooses and freight cars for their own use, and the GN and NP also built cars and cabooses for the SP&S. Each of these car shops had a unique style in their construction and modeling all of that can be a challenge. Sometimes heavy kitbashing, scratch building, or expensive brass is the only way to go.

Below: This Chuck Zeiler photo is what Farley used to base his custom weathering job on.

When you model a specific prototype railroad, era, location, and a realistic operating scheme, new products pick you, rather than you picking them. Some people may think that this is difficult, overly limiting, or no fun, but it’s one of my favorite parts of the hobby. The ScaleTrains CB&Q Havelock shops gondola is a home run for me since it fits every one of these criteria.

Built by the CB&Q shops at Havelock in Lincoln, NE in three runs: 1965, 1967, and 1968, these 300 cars, 83300-83599, were initially equipped with three removable roof sections for hauling coil steel, coil aluminum, and coil tin plate. Each group of 100 also has little detail variances, such as grab iron or logo placement. By the summer of 1977, roughly half of these cars had been shopped and repurposed for general use. In the 1980s, BN rebuilt many of these cars with reinforced external ribs and Cascade Green paint, so repaints would probably be too new for me. A well-used CB&Q car or two in general service would fit the layout quite nicely. Bismarck, ND had a scrap metal operation on the east end of town, so these cars would be assigned to my scrap metal industry.

I purchased the car from ScaleTrains numbered 83453. The kit went together quickly, and in about 15 minutes it was up and running. Since gondolas are some of the most abused cars in all of railroading, this car would need to be weathered to look like eleven years of service had taken its toll. Luckily, a photo of this exact car taken by Chuck Zeiler in 1980 had been posted on the rrpicturearchives.net website. The photo shows medium weathering and a number of unique details to the car. The car’s side grab irons had been removed and replaced with ladders. I particularly liked the yellow paint on the right side and end ladders. The car had some peeling paint along the bottom sill and near the lube stencil. The instructions for securing the roof sections had been painted over with what appears to be a gray spray can. The Burlington Route had faded, and the ACI plate was dirty, while the Lube Stencil was new and quite clean.

I shaved off the cast on grab irons with an X-Acto knife, and replaced them Tichy ladders cut down from eight rungs to five. I used a fine brush to paint the gray patches. I simulated the peeling paint around the lube stencil with a medium gray paint with just a touch of silver added. ACI and lube stencils had been added on plates attached to the car sides. I cut these decals from Microscale sheets, but they are glued to the car sides, rather than decaled. I use a Sharpie to color the edges of the decal paper before gluing them to the car. I used a combination of light washes and weathering powders on the exterior. The interior got more attention. I used an overspray of black and silver on my open-top cars, so some of the body color shows through. Then I use a heavy application of rust wash and powder. Finally, after weathering, I used decals to update the shop date and simulate a blanked-out “R” next to the car’s GB designation.

In a world of extremely well-detailed ready-to-run freight cars, this kit project gave me a great model of a unique prototype that fits my era, locale, and operations. CB&Q’s Havelock gondola should have a home on any 1970s or 1980s layout.