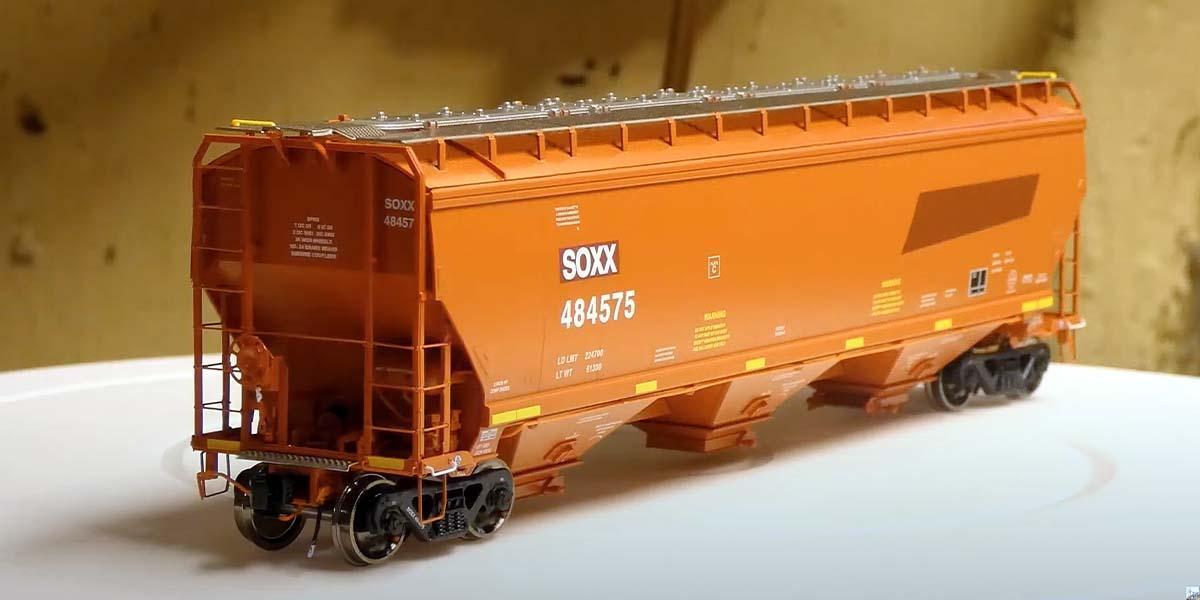 Posted in: How To's, Time To Model, Submitted Articles, Weathering

An Article by Jon Hill

What I’m hoping to accomplish in this article. Is to show that you can do a very nice weathering job with a few techniques. That can be replicated and adjusted to fit a wide variety of rolling stock. For this piece. We are using a CSX 5188 Gunderson covered hopper in the ScaleTrains “Rivet Counter” line.

Some background on these cars. They were originally built in 2008 for CSX. Approximately three to four years later they were sold off to Union Pacific and were patched with CMO – Building America overlays. For this project, we are looking to replicate these cars still under CSX livery after about two years of service.

You will need a few basic items to do a project like this.

First step is to remove the car from the packaging. Always do a base inspection to make sure there aren’t any glaring issues or repairs that need to be done. One thing to check for is fingerprints from the factory. While rare. It does happen. Usually wiping off with acrylic thinner and a paper towel will do the trick if you do run into a fingerprint.

As the wheelsets are completed. We turn our attention back to the hopper itself. The next part to attack is the underframe. There are several detail points on the hopper that need to be brought out using Tamiya’s black panel wash. If you go a bit too heavy on the panel wash. You can dab your micro swab in Mineral Spirits and clean the excess away.

As the wheelsets are completed. We turn our attention back to the hopper itself. The next part to attack is the underframe. There are several detail points on the hopper that need to be brought out using Tamiya’s black panel wash. If you go a bit too heavy on the panel wash. You can dab your micro swab in Mineral Spirits and clean the excess away.

Upon adding the washes in several places. It’s time to start building up the grime on the underbody. If you’ve ever seen a derailed train before. That’s an easy reference point on how and where grime and kickup build underneath a car. Generally, directly over trucks will accumulate quite a bit more than the center of the car.

Turning the car on its side will reveal the next step. Which is to replicate the kickup grime alongside the bay of the hopper and in the many nooks’ underneath. The general rule of thumb is to let the grime accumulate where the wheel will kick up the grime directly onto the car. You will also note a lighter amount accumulates on the bottom side of the center bay as well.

The next step in the process is to replicate the kickup on the ends of the car. These will vary from car to car depending on floors. These cars have an open cage end. Which does allow for some heavier grime to be kicked up. This is also a good time to re-attach the trucks to the hopper as they will also get weathered.

So, this is the fun part and where some of you will inevitably go… “What are you doing to this car?” So here’s the plan: we will be airbrushing the side of the car with the Modelflex Rail Brown color. Along with the truck side frames gently. The next step will be better. You just have to trust me!

Using the Tamiya Acrylic thinner with a paper towel and Micro Swabs we wash away all of the excess paint to show just the remaining paint along the seams and angles of the car sides. This step may take a few times to look correct depending on how pronounced the seams are on the freight car.

Progressing to the top of the hopper. It’s time to add some Tamiya Black Panel wash to the hatch details. This really brings out what is already very nice detail work done by ScaleTrains.

Now obviously. These hoppers while under CSX ownership didn’t get incredibly heavy weathering. So some spillage down the sides has to be lightly done. This is a mix of the Rail brown and grimy black Modelflex colors. Airbrushed in vertical streaks. Done in random spots underneath the hatches of the car on either side.

Getting to this point. The car is ready to be sealed with the Mission Models flat clear. Looks pretty nice from the workbench. It’s probably a good idea to see it in its natural habitat though. Right?

The next few shots were taken on the display layout at Lombard Hobbies (who is also a ScaleTrains dealer). This car looks to fit right in on the layout.

In closing. I hope this article might give you a few ideas to work on your own rolling stock fleet. These techniques can be applied to many pieces across the rolling stock spectrum.