The GE DASH 9 Series (built from 1991 to 2004) replaced the earlier DASH 8 series and featured numerous electronic improvements that enhanced overall performance and reliability. With these enhancements, the DASH 9 series was well-liked by the railroads and as a result, quickly became one of the most common locomotive types in the United States. Most are still in service today. 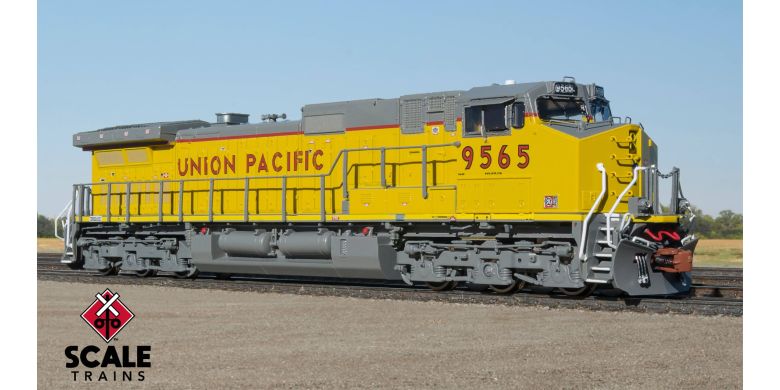 General Electric wrestled the title of top domestic locomotive builder from EMD during the late 1980s with their Dash-8 series. Entering the 1990s, GE completely revamped their locomotive lineup by utilizing customer feedback, learning from experience gained from previous locomotive series, and improvements in technology.

A single C44-9W demonstrator unit, numbered 8601, made its debut in 1993 (and later became C&NW 8601). While similar at first glance to predecessor models like the C40-8 and C40-8W, the Dash-9 series featured a few notable physical differences. Built on a slightly longer platform that allowed for a massive 5,000 gallon fuel tank, Dash-9s also featured thicker radiator “wings” at the rear of the carbody. This is usually the quickest way to differentiate them from previous models.

Thanks to its long production span and customer options, small detail differences could be noted between various customer orders. This includes changes with HVAC system vendors (the large “A/C” box behind the cab on the conductor’s side), engine cab profile, radiator lifting lugs, hood end, trucks, fuel tank, stepwells, operator’s cab, and even handrail profiles.

The C44-9W proved to be extremely popular over its production span with over 3,500 locomotives being sold new to BC Rail, BNSF, Canadian National, C&NW, Norfolk Southern, QNS&L, Santa Fe, Southern Pacific, and Union Pacific.

Norfolk Southern was an important customer with over 1,000 Dash-9s on the roster. They preferred customized models in the form of 100 spartan-cab equipped, 4,000hp C40-9s (nicknamed “Top Hats”) and numerous examples of safety cab-equipped versions rated at 4,000hp, and designated as C40-9Ws. All C40-9/Ws would eventually be uprated to 4,400hp with their designations changed accordingly.

The Dash-9 series remained in production until the early 2000s when it was superseded by GE’s “Evolution Series” ES40/44-series models. Age has begun to catch up with the earliest C44-9W and related models so some railroads are storing and/or rebuilding these veteran units. NS’s oldest units, the spartan-cab C40-9s, have been rebuilt with the latest GE safety cab for increased crew comfort and safety plus AC-traction for increased performance.

Originally built in the early 1990s, some of BNSF’s former Santa Fe fleet are also in the process of being rebuilt with AC-traction to extend their service lives and improve their performance.

Built over a long timeframe, and proving to be a solid, upgradeable platform, the C44-9W family of locomotives including rebuilds is sure to remain a fixture on today’s railroads for the foreseeable future.