Pullman-Standard introduced a 5820cf capacity car for plastics in late 1971. The cars featured four bays and had a length of nearly 70 feet. The earliest versions featured a peaked roofline and 17 exterior posts per side. Later versions adopted the trademark P-S “clerestory” roofline that was also utilized on their landmark 4750cf grain hopper. While the oldest 5820 cars have been withdrawn from interchange service, many cars built after July 1st, 1974 remain in revenue service today.

The new ScaleTrains HO Scale Rivet Counter™ series model of the Pullman-Standard 5820cf Covered Hopper Car captures the railroad, road number, and era-specific™ features of the prototype, as well as changes made to the cars throughout their 50+ year lifetime. 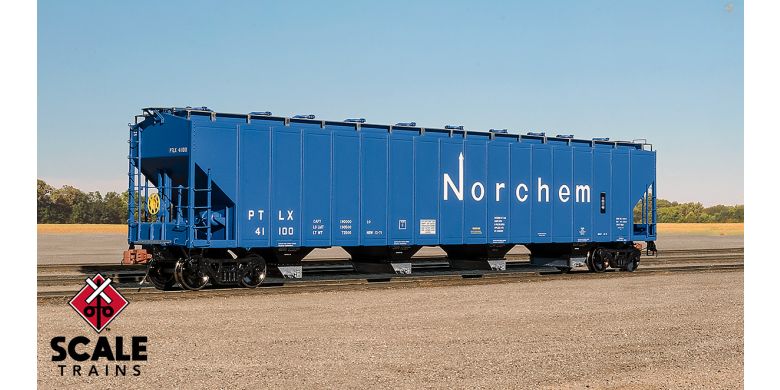 Just one word: plastics. It’s the answer to the question of “What is one of the most important inventions of the modern age?” In the 21st Century, plastics play a crucial role in nearly everyone’s life and have many valuable uses ranging from containers for foods and beverages, as parts for household appliances, vehicles, model trains, and casings for electronics such as computers and cellphones. The list goes on and on. While not without its drawbacks – like slow degradation and serious environmental issues involving the proper disposal of plastics – their importance in everyday life cannot be overstated.

The raw plastic that is used in industrial settings is typically produced from petrochemicals and made in a variety of grades and compositions to suit different applications. The raw plastic is typically shipped in the form of small granules or pellets. For producing most items, raw pellets are taken in by the end-user where they are heated until they are molten, have any necessary dyes or additives added for a desired final color and properties, and injected under extremely high pressure into molds for the final product. Like so many commodities, plastic pellets lend themselves well for rail transport, which has led to the development of numerous car designs over the years to handle this important commodity.

The covered hopper car has proven to be the ideal design for carrying plastic pellets and is well-suited for their density and handling characteristics. While plastics cars in the early 1900s were typically conventional covered hoppers of the era, by the 1960s specialized car designs were developed. Compared to covered hoppers intended for grain products, plastic pellet cars were often physically larger – owing to the low density of the plastic pellets and the desire to utilize higher car tonnage ratings. Smaller, round loading hatches are also common, being easier to seal and keep out contaminants. Outlets are specialized as well, typically being pneumatic designs that allow hoses to be attached to the outlet and use a vacuum to draw the lightweight pellets out of the car bays.

Pullman-Standard was one of many legacy domestic car builders that would introduce a design intended to serve the plastics trade. Drawing heavily upon existing grain hopper designs in their catalog, Pullman-Standard introduced a 5820cf capacity car in late 1971. Designed with plastics products in mind, these exterior-post cars were imposing, featuring four bays, and a length of nearly 70 feet over the couplers. The earliest versions featured a peaked roofline and 17 exterior posts per side.

Later versions adopted the trademark P-S “clerestory” roofline that was also utilized on their landmark 4750cf grain hopper, as well as a revised side panel construction utilizing 19 posts. Initially, the posts featured a small triangular notch at the bottom before switching back to a solid-bottom design. Also reflecting a family appearance with other designs in the P-S catalog, such as the 4785cf covered hopper, all of the 5820cf cars featured vertical structural shear plates on the end sills.

The P-S 5820cf covered hopper proved to be a popular design, with a large number built for a number of private owners, as well as Pullman-Standard’s lease fleet, between 1971 and 1982. While the oldest 5820 cars have been withdrawn from interchange service by now, having reached their 40-year age limit, cars built after July 1st, 1974 are allowed 50 years of service, and up to 65 years if they meet “Increased Service Life” criteria. And like most car designs, the 5820s have exhibited changes over their service lives, mostly to their hatches and outlets.

As-built, most were equipped with P-S / ITEL Corp. proprietary “Micro-Matic” pneumatic outlets and either “Mon-o-Wheel” or “Tri-Wheel” roof hatches. As these components wore out, they would often be replaced by aftermarket replacements, such as Salco-brand Kam-Op pneumatic outlets. Salco also offers a popular line of replacement hatches for these cars, either plain or vented, which helps negate the need for personnel to climb onto the car running boards to open hatches for venting while unloading.

Operationally, they tended to congregate in petrochemical production regions waiting for loading (e.g., the Texas “Chemical Coast”), but were – and still are – seen traveling nationwide in singles or in blocks of cars heading to production facilities for items ranging from plastic milk jugs to fiberglass panels. Interestingly, they can also be seen staged at plastics logistics yards where huge blocks of loaded plastics hoppers are parked, with pellets bought and unloaded as needed onsite by the customer using tractor-pneumatic tank trailer rigs, essentially making the cars rolling warehouses.

The new ScaleTrains™ Rivet Counter™ HO Scale series model of the Pullman-Standard 5820cf covered hopper represents many months of painstaking research and engineering work in order to capture the original design features of the prototype, as well as changes made to the cars late in their lives. All three production versions have been created, and various appliances that cover the cars from their first days until the present have been tooled.

These cars come equipped with Barber S-2 100-ton trucks that feature separate brake beam detail, as well as two new styles of rotating bearing caps installed as appropriate: Timken, or Brenco 6-sided caps. Weighted to match NMRA specifications, these smooth-rolling, highly-detailed models are available in a wide variety of paint schemes for modelers of the 1970s to the present.