In late 2021, we refreshed our logo and color palette. To celebrate our new look, we decided to include our fans and launch a paint scheme design contest utilizing our Rivet Counter ES44 locomotive. After opening the vote, hundreds of modelers cast their ballots for their favorite design from 3 finalists. With the results in, we’d like to congratulate Jesse Gahring on designing the next ScaleTrains-branded ES44 locomotive. 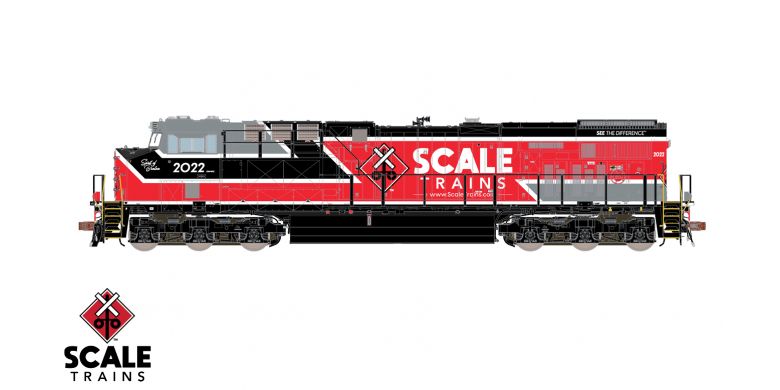 In 2002, GE released the first GEVO, a new series of locomotives that would replace the AC4400CW and Dash 9-44CW. The first two models were the ES44DC and ES44AC. The ES44C4 followed a few years later.

The new models were designed to meet the stricter diesel locomotive emissions standards imposed by Environmental Protection Agency (EPA) regulations. The EPA “Tier” emissions standards are a series, or Tiers, of allowable emissions levels based upon a locomotive’s date of manufacture. In 2005, Tier 2 took effect followed by Tier 3 in 2010 and Tier 4 took in 2015.

GE developed a new diesel engine, the 12-cylinder GEVO 12, to meet the new emission standards. Both the bore and stroke were increased to produce the same 4,400 horsepower as the older 7FDL16 16-cylinder engine.

The external appearance is similar to the AC4400CW. In fact, the cab on early ES44s is almost identical. In 2009, GE changed the cab and nose, moving the nose door from the left side to the right side and replacing the curve seams with more square seams.

Unlike their predecessors, both the AC and DC versions of the ES44 have the large box behind the cab. The biggest visual difference is the larger “wing” structure over the radiator cab. The thicker radiators and related equipment in the radiator cab work to cool the exhaust, which reduces emissions.

Customer options and design changes have resulted in seven different dynamic brake configurations. The grilles on the sides of the radiator cab have also gone through seven configurations. The most recent units have changed the latches on the engine cab doors to match the ET44 units.

Although EPA Tier 4 standards went into effect in 2015, the ES44-series continue to be built. This is due to the Tier 4 Credits, a complicated system that allows GE to continue to build and various railroads to buy the ES44 based on the number of Tier 4 units built.

After 2 testbed units and 35 pre-production units, over 7,600 additional ES44s have been built. All of the major railroads including BNSF, Canadian National, Canadian Pacific, CSX, Norfolk Southern, and Union Pacific have fleets with 100s of units. Florida East Coast, Ferromex, Iowa Interstate, and Kansas City Southern also operate ES44s. In addition, 131 were built as lease units for Citirail.

The ES44 has become the best-selling diesel locomotive of all time.

Jesse Gahring’s ScaleTrains-branded paint scheme design takes inspiration from both the Chicago & North Western Railroad and the New York Central System. With vintage lines that take us back to the golden age of railroading, this ES44 looks classic while also remaining contemporary by displaying our new ScaleTrains logo prominently on each end of the locomotive. It also features the “Spirit of Benton” on the side of the nose which is a nod to our headquarters in the mountains of southeast Tennessee.