Introduced in 1984, the C39-8 maintained the clean contours of the long hood and rounded cab roof of the Dash-7 series but featured larger, angular radiator “wings” at the rear of the carbody, an angular low short hood, and a boxy dynamic brake and clean air compartment at the front of the long hood, which jutted above the cab roofline. 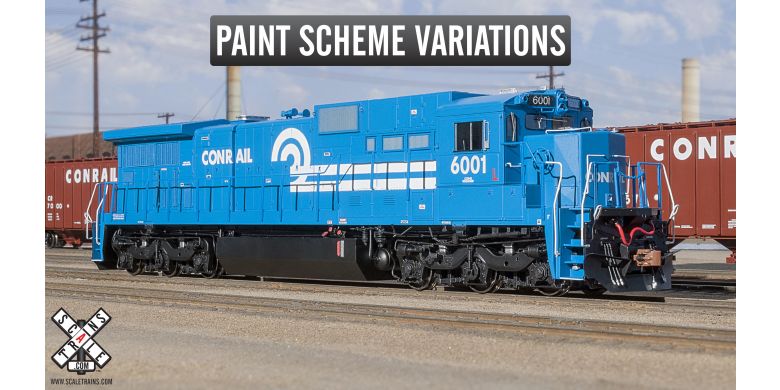 Skip to the beginning of the images gallery
ADDITIONAL PHOTOS
PRODUCT DETAILS
Road Number Specific ScaleTrainsRivet Counter C39-8 Locomotive Also Feature
PRODUCT VIDEOS
PROTOTYPE HISTORY
As the 1980s began, and with the success of their Dash-7 series, introduced in 1976, locomotive builder General Electric sought to build upon their momentum with an improved line of locomotives. Based upon technological advances and customer feedback, GE debuted its “Dash 8” series in 1983 with demonstrator unit #607.

Featuring improvements to the FDL series prime mover and microprocessor controls, the Dash-8 line promised improved performance, as well as improved reliability and maintainability, over their Dash-7 predecessors. While keeping the clean contours of the long hood and rounded cab roof, two characteristics of the Dash-7 series, these new Dash-8s featured larger, angular radiator “wings” at the rear of the carbody, an angular low short hood, and a boxy dynamic brake and clean air compartment at the front of the long hood, which jutted above the cab roofline.

The Norfolk Southern, testbed units numbered NS 8550-8551, made an imposing sight in their black paint, and were soon joined by an additional 12 units, NS 8552-8563, built in 1984. While similar to their testbed siblings, these additional units featured slight changes to their carbodies, known as “phases” to railfans and modelers. The testbed units would be dubbed “Phase Ia”, while NS 8552-8563, with slight production changes to their radiator grills and dynamic brake compartment would be known as “Phase Ib” units.

Pleased with their performance, an additional 50 units were delivered in 1985, NS 8564-8613. “Phase II” units, they differed from the previous orders by featuring high-capacity dynamic brakes that resulted in an additional dynamic brake intake and exhaust opening (for a total of three), a handbrake wheel instead of ratchet handbrake, and a larger 4,400 gallon fuel tank replacing the 3,900 gallon tank of previous orders. Also eliminated were the vertical grab iron “ladder strips” on the end of the long hood. Rounding out the NS fleet would be an additional 50 units, built in two batches of 25 units each, NS 8614-8638 and NS 8639-8663, delivered in 1986. These so-called “Phase III” units would feature even more subtle changes; the radiator grills at the end of the long hood featured a slightly different configuration and a flush mounting, the cab doors changed to a square-cornered design, and the units featured a tall 42” snowplow at both ends, in contrast with the smaller 35” plow of previous deliveries.

Just when it seemed like NS would be the sole operator of the C39-8, eastern carrier Conrail ordered 22 units, delivered as CR 6000-6021, in 1986. Phase III units that shared some common features as their NS contemporaries, they did have some physical differences unique to Conrail; single-color red marker lights were installed instead of the tri-color class lights found on the NS units, and a massive anticlimber assembly was installed on the front pilot. Delivered in Conrail’s attractive blue and black scheme, they featured the then-standard large Conrail “Wheels on Rail” logo on the long hood.

On the NS, the C39-8s could often be found hauling one of NS’s key commodities at the time: coal. Setup with bidirectional control stands, it wasn’t uncommon to see a C39-8, or several, working long-hood first on a lengthy coal drag on NS territory. Conrail’s small fleet was commonly seen working on a variety of assignments, from mixed freight to intermodal. Both CR’s and NS’s C39-8s could be routinely seen operating as run-through power on connecting railroads, such as CSX, Union Pacific, and Southern Pacific. CR and NS C39-8s have been photographed far away from home; they’ve been seen as far west as Long Beach, California, operating on the Southern Pacific. In fact, a power-hungry SP leased Conrail C39-8s in the early 1990s, with the leased units featuring a small red “L” painted on their cab sides, signifying their leased status, and adding a splash of color to SP motive power consists over the system.

As the years and miles added up, the C39-8s of both CR and NS would undergo small physical changes. To aid crews climbing aboard, small vertical grabs would be added to the nose fronts of the NS units, while Conrail opted to add large “inverted-L” grabs to the noses of theirs for the same purpose. Repaints in later years would introduce new paint scheme variations; some NS units would receive dashed white sill stripes, while some CR units would receive solid white frame stripes. Several CR units were noted to receive the “Conrail Quality” paint scheme, as well. Their as-built class lights eventually disappeared from the NS fleet, and by the mid-1990s, FRA-mandated ditch lights began to appear on both the CR and NS fleets.

The year 1998 brought more change, as Norfolk Southern and CSX acquired Conrail. The eastern giant was split between the two carriers, including locomotives and rolling stock. NS received 13 former CR C39-8s, while the remaining 9 CR C39-8s went to CSX. While most kept their blue paint, gaining a “patch” renumber into the CSX fleet, four of them received CSX paint – two painted in YN2, and two receiving YN3. Norfolk Southern repainted several of their former Conrail C39-8s as well, exchanging their coats of Conrail Blue for NS black.

By the early 2000s, with many miles racked up by the C39-8s, and newer, more reliable and fuel-efficient locomotives coming online, the trailblazing GEs began to be set aside in deadlines, with many meeting the scrapper’s torch. Some were spared that fate, being exported to Central America, home to railroads with a healthy appetite for used US locomotives. A handful found new homes on US shortlines and lease operators, but their use was to be short-lived. As of this writing, the only examples in operation in the US are a pair of former Conrail (by way of NS) units in use by eastern shortline Pennsylvania Northeastern Railroad. While no longer hustling along the high iron with long coal or hotshot intermodal trains in tow, the PNRR’s pair of units operates regularly, and represents the last of GE’s pioneering early Dash-8s.
PRODUCT SUPPORT