The unique SD40T-2 “Tunnel Motor” was the backbone of the Southern Pacific and Rio Grande fleets during the 1970s and 1980s. They were distinguished by the see-through radiator grilles at the rear of the locomotive.

Our Rivet Counter series model is the first and only SD40T-2 to feature a completely hidden rear driveshaft and gear tower so the “tunnel” is completely see-through without any visible obstructions. 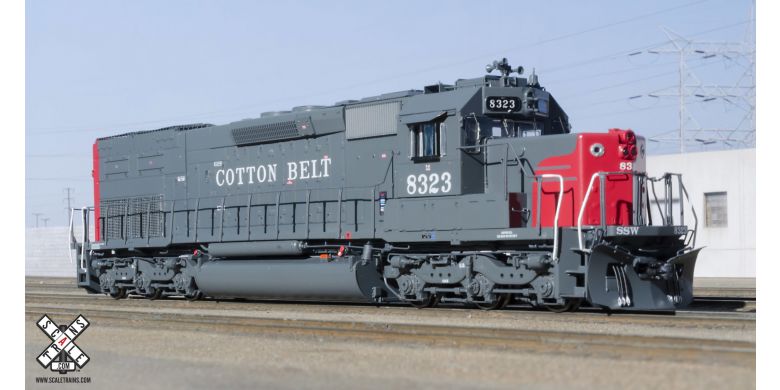 Skip to the beginning of the images gallery
ADDITIONAL PHOTOS
PRODUCT DETAILS
Road Number Specific ScaleTrains Rivet Counter SD40T-2 “Tunnel Motor” Locomotives Also Feature* some sound and lighting function on DCC & sound equipped models are not operable using DC
PRODUCT VIDEOS
PROTOTYPE HISTORY
Due to their rugged operating environment, stretching from the Pacific coast, to the Sierra Nevada, to the deserts of the Southwest, Southern Pacific Railroad, and its subsidiary, the St. Louis-Southwestern (aka Cotton Belt), weren’t shy about ordering specialized equipment. The famed AC-series “Cab Forward” articulated steam locomotives were one example, designed with tunnel and snowshed operation in mind. Partway into SP’s diesel era, the tunnels and snowsheds common on the western half of the system would again prove to be an operational headache, thanks to locomotives overheating during long pulls in their cramped confines. Once they overheat, thermostatic controls would automatically make the unit reduce its output, or even shut down altogether, resulting in a loss of horsepower that may be enough to stall the train.

SP and EMD would collaborate on finding a solution to the problem. One idea that was tested in the late 1960s was “Elephant Ears”, large sheet-metal airfoils, applied to the radiator intakes of various members of SP’s large SD45 fleet. While effective at their intended purpose of directing a greater volume of cooling air towards the radiators, and reducing overheating problems, they were a maintenance hassle that blocked easy access to numerous hood doors. Engine crews also disliked them, as they could be an impediment on the walkways. A more permanent solution would be found in 1972, with the delivery of the first SD45T-2 to SP. Cataloged by EMD as an extra-cost option of their basic SD45-2 … “SD45-2 with cooling system modifications”, as described in EMD product manuals from the early 1970s … the SD45T-2 built upon the basic principle of the elephant ears, but in a permanent package. A success, SP would order a “T-2” variant of the SD45T-2s cousin, the SD40-2.

For the SD40T-2, the basic SD40-2/45-2 frame was stretched several feet to allow for an enlarged radiator compartment at the rear of the long hood. Instead of the traditional placement of the radiator fans on the long hood roof, above the radiator cores and intake grills, the T-2 design placed the radiator fans and a diffuser assembly inside of the hood, below the radiator cores, and above a large, open radiator intake area placed at walkway level, resulting in faster, more efficient cooling. SP 8300, built in 1974, would be the first SD40T-2, whose fuel-efficient sixteen-cylinder 16-645E3 prime mover would prove to be more popular than the thirsty twenty-cylinder 20-645E3 used in the SD45T-2.

The SD40T-2 quickly became a fixture on the Southern Pacific, with a total of 240 units built for SP (and its Cotton Belt subsidiary) between 1974 and 1980. Built in multiple groups over that time period, they would exhibit various customer option differences, as well as EMD production differences. The first SD40T-2s, SP 8300-8306, and 8350-8356, were equipped with 116” long extended low short hoods to house Locotrol electronic equipment for remote control helper operations. Subsequent deliveries of units equipped with extended “snoot” low short hoods would measure 123” in length, reflecting EMD design changes across the product line. All SP/SSW units featured a large air conditioner housing on the cab roof (a welcome relief in the arid southwest), a 3-chime Nathan P3 airhorn offset to one side of the number board housing, and in the case of the Locotrol-equipped snoots, additional antenna ground planes and related cable conduits on the cab roof.

And of course, the units would be equipped with SP’s traditional Pyle-National “Gyralite” signal light package; while the SP 8300-8306, 8350-8356 only had signal lights on the front, changes to signal light policy saw all subsequent orders equipped with these safety appliances front and rear. The dual clear Gyralite assembly was intended to supplement the standard dual sealed-beam headlights as an attention-getter for motorists and pedestrians, while the single red-lensed Gyralite was meant as a safety feature for other trains. Tied into the brake system, when brake pressure suddenly dropped, in an emergency brake application, as might happen when brake lines parted in a derailment or other mishap, the red Gyralite would automatically illuminate, extinguishing other headlights in the process, as a warning to trains on adjacent tracks that the train was in emergency, and to be wary of derailed equipment possibly fouling the tracks.

In the Rockies, coal hauler Rio Grande faced similar operating challenges as SP in regards to long tunnels and heavy grades, such as the massive Moffat Tunnel, stretching over 6 miles long. Liking what it saw in the SD40T-2, Rio Grande would order them as well, taking delivery of its first units in 1974. Painted black with Aspen gold striping on the ends, sidesill, and number board box, a total of 73 units would be delivered to the Grande. Eschewing cab air conditioning, Rio Grande optioned a dual Mars light, later Gyralite, assembly mounted in the low short hood, and most distinctively, requested a 4,000 gallon fuel tank, in contrast to the longer 4,400 gallon tank specified on all SP/SSW SD40T-2s.

Popular with engine crews and maintenance forces alike, the SD40T-2 would form the backbone of the SP and Rio Grande locomotive fleets well into the 1990s. Physical changes would appear to their fleets over the years; as a cost-cutting measure during the mid 1980s, as SP was struggling during an economic downturn, as well as the failed SPSF merger, the distinctive Gyralite signal lights, with their electric motors and moving parts, started to be removed, replaced by Prime Stratolite “digital” rotary beacons on the cab roof. Also deleted were the expensive engineer’s side “L” front cab windows, replaced by cheaper, more standardized pieces of impact-resistant glazing.

On Rio Grande’s fleet, changes were subtle; following the success of their SD50s, beginning in 1985, Rio Grande began to retrofit their SD40T-2 with Positive Traction Control, or PTC (different from the definition of PTC in the 2000s), which promised increased tractive effort on par with the newer SD50s. The retrofit consisted of wheelslip sensors added to all axles, as well as an electronic control cabinet added to the walkway behind the cab, on the conductor’s side. By 1989, the SP/SSW and Rio Grande SD40T-2 fleets would become one, with the purchase of Southern Pacific by Rio Grande Industries, with the better-known Southern Pacific name being used as the corporate image for the combined companies.

Into the 1990s, the SD40T-2s soldiered on. In 1991, the SP “Speed Lettering” paint scheme was introduced, with elements taken from both SP and Rio Grande. With a backlog of tired units needing overhauls and fresh paint, only a relatively small number of SP and Rio Grande SD40T-2s would be repainted into the striking new livery, but they looked sharp amongst a sea of grungy locomotives. While the new livery showed promise for a railroad that had struggled throughout the 1980s and was seemingly getting back on its feet in the 1990s, it was to be short lived, as Union Pacific would acquire Southern Pacific in 1996, with the merger taking effect on 9-11-96. As with past merger acquisitions, UP quickly absorbed the combined SP/SSW/DRGW SD40T-2 fleet, with many receiving coats of UP Armour yellow and gray. Others would receive new UP-system numbers in the form of a “patch” over their old numbers.

Into the 2000s, as newer, more fuel-efficient locomotives came online, the SD40T-2s that had served so well for over thirty years slowly started to fade from use on the UP. However, not all were to meet the scrapper’s torch; some would be sold, and go on to careers with shortline or regional railroads, such as KCS and Wheeling & Lake Erie. While far removed from the western tunnels and snowsheds they were designed for, these venerable machines soldier on for their new owners, and should continue to do so for years to come.
PRODUCT SUPPORT