The SD45 was the “Big Block Chevy” of EMD’s “1966 Line” of locomotives. In the early 1960s, railroads were requiring more and more horsepower from locomotives to meet the demanding schedules of growing high-priority and intermodal (TOFC) traffic. This equated to faster acceleration and the ability to maintain higher speeds. 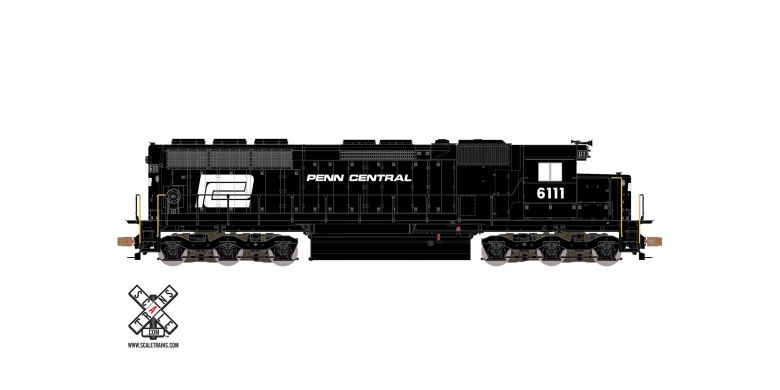 Skip to the beginning of the images gallery
ADDITIONAL PHOTOS
PRODUCT DETAILS
Prototype Specific ScaleTrains* Not all sound and lighting functions on DCC and sound equipped versions are operable using DC
PRODUCT VIDEOS
PROTOTYPE HISTORY
Entering production in 1966, the SD45 was the “Big Block Chevy” of EMD’s “1966 Line” of locomotives. During the early 1960s, railroads were demanding more and more horsepower from locomotives to meet the demanding schedules of growing high-priority and intermodal (TOFC) traffic. Higher horsepower equates to faster acceleration and the ability to maintain faster speeds. American railroads wanted as much of both as they could get.

Union Pacific (UP), in particular, prodded builders to up the horsepower ante which resulted in several exotic locomotives in the 1950s and 1960s. This included the GE/Alco Gas Turbine designs and various double-diesel designs such as the Alco C855, GE U50 and U50C, and EMD DD35 and DDA35.

While these UP locomotives delivered plenty of raw horsepower, they were big, unwieldy machines, which limited their operational territory. This also made them unattractive to interchange partner railroads as run-through or pool power. In addition, a failure of one prime mover or other critical system of a double-diesel would sideline the entire locomotive, effectively resulting in two locomotives out of service.

Western giant Southern Pacific (SP) would also dabble with double-diesels by acquiring a handful of GE U50s and EMD DD35s. While these various locomotives delivered impressive performance, the size of the double diesels were still a liability plus reliability was questionable.

SP would even go as far as across the Atlantic Ocean to satisfy their appetite for more horsepower, acquiring diesel-hydraulic drive locomotives from Bavarian manufacturer Krauss-Maffei. The precision-tuned Krauss-Maffei’s were not up to the rigors and deferred maintenance of American railroading so they had relatively brief careers.

To meet the demand of greater horsepower from a more standardized package, EMD would go back to the drawing board in 1965 to develop a new prime mover. The previous prime mover series, the 567, used in models from F and E-units, to GP7s and GP35s, and everything in between had reached its developmental limits. EMD would increase the cylinder bore of the new prime mover, resulting in 645 cubic inches of displacement per cylinder … thus, the 645 was born.

As with the 567-series of prime movers, the 645 was built in several variations for different applications. 8 and 12-cylinder versions would power switchers and medium horsepower units, while a 16-cylinder, 3,000hp turbocharged version would power one of the flagships of the line, the SD40. To answer the call for even more horsepower, a 20-cylinder, 3,600hp turbocharged variant was developed. This variant, designated the 20-645E3, would be installed in a set of SD45 demonstrator units in late 1965. The SD45 would define the 1960s horsepower race.

Dressed in EMD white and metallic blue, the SD45 demonstrators made a striking appearance. Part of the new lineup of locomotives introduced in EMD’s 1966 catalog, the SD45 was the brute of the bunch. While keeping the basic family appearance of its stablemates, the SD45s featured distinctive outward-canted, or “flared” radiator intakes at the rear of the carbody that smoothly blending into the contour of the dynamic brake hatch.

While the “SD40X” 645 prime mover testbeds of 1964 featured flared radiators as well, the SD45 was the first EMD to go into production with this feature. While it added to the brutish, broad-shouldered look of the SD45, this feature was a practical one. It allowed for deeper radiator cores to help cool the massive 20-cylinder prime mover. The demonstrator units would barnstorm across the country to help promote the new technology.

From the beginning, the SD45 was a hit. When production commenced in 1966, nearly all major railroads of the era would purchase SD45s.

Western carriers Southern Pacific, Santa Fe, and Union Pacific would acquire fleets of SD45s. They handled priority TOFC trains, coal drags, and everything in between.

The Hill Railroads of the Pacific Northwest also bought SD45 including Great Northern (GN), Northern Pacific, and Frisco. In fact, GN’s first SD45, GN #400, would hold the distinction of being the very first production SD45 built. To celebrate the power and versatility of the latest EMD locomotive, GN #400 received the nickname “HUSTLE MUSCLE” on its long hood.

Eastern carriers purchased the SD45 as well. Pennsylvania Railroad acquired a sizable fleet, which lasted only a few years before being folded into Penn Central. Erie-Lackawanna was another notable customer because their SD45s were equipped with low-profile radiator and dynamic brake fans, exhausts, and horns to meet lowere overhead clearances on one of their routes.

SD45s were prevalent in the Southeast as well. Seaboard Coast Line units lasted all the way through mergers into CSX. Norfolk Southern and Southern operated their SD45s long hood forward.

Despite their initial success, the SD45 had teething troubles. The massive 20-645 prime mover had a tendency to break crankshafts early on. EMD quickly re-engineered and implemented a running change. Leakage from the extra-deep radiator cores that gave the SD45 its distinctive appearance was an issue some railroads faced early on. Once again, EMD would quickly diagnose and correct the problem.

Throughout the 1960s until production ended in 1971 with the introduction of the Dash-2 line and its successor, the SD45-2, the SD45 sold well. Burlington Northern (BN) 6567 holds the distinction of being the last SD45 ever built.

As the nation entered the 1970s, there was a driving force that was to sour railroads on the SD45: fuel costs. Its high horsepower rating came at a price, with its 20-cylinder prime mover gulping fuel at a higher rate in comparison to other models like the SD40 and SD40-2. Several railroads felt the extra 600hp over models like the SD40 and SD40-2 did not justify the increased fuel costs. The OPEC oil embargo of 1973-74 didn’t help matters. Skyrocketing fuel costs made every drop of fuel precious so conservation and efficiency becoming paramount. Models like the SD40-2 were to shine, while on most roads, the SD45 came under greater scrutiny.

As the 1970s wore into the 1980s, SD45s quickly started to fall out of favor. With fuel efficiency and reliability the watchwords of the day and newer models from EMD and GE being introduced, tired SD45s quickly filled dead lines across the country. Some were retired relatively young. For example, BN 6567, built in 1971, was retired in 1986, which is a relatively brief career for a locomotive. While some became trade-in fodder, others met their end at end of a cutting torch.

Secondhand sales gave a new lease on life to many SD45s. They found work on shortline and regional railroads like Susquehanna and Wisconsin Central where they became the backbones of their fleet.

Some original owners weren’t ready to give up on the SD45. Southern Pacific, for example, embarked on a capital rebuilding program in the early 1980s. Electrical cabinets were rebuilt and rewired to Dash-2 standards. New engine governors dropped the horsepower slightly to 3,200hp to help save fuel. Santa Fe also upgraded many members of their fleet as well, extending their useful service lives.

The secondhand locomotive market was extended the life of several SD45s as well. In the early 90s, SD45s were to find newfound popularity as “cores” for rebuilding projects. Tired, rusty hulks that had been sitting dead in dealer backshops were suddenly in demand, with leasing companies, and railroads like Southern Pacific, seeing value in SD45s rebuilt to the latest specifications.

Most dramatically, these rebuilds would see the original 20-645s removed, and replaced with 16-cylinder versions in their place, to help make them more fuel-efficient. Locomotive leaser and rebuilder Morrison-Knudsen, who undertook the program to rebuild secondhand SD45s for SP, became so adept at the process, they even developed a technique to cut-down the original 20-645 engine blocks into 16-645s, fabricating new crankshafts and other parts as well. While they may be the mechanical equivalent of an SD40-2 on the inside, externally they still looked like SD45s.

As the 90s drew to a close, the sun began to set on the SD45 and rebuilt lookalikes. Mergers and fleet consolidations saw many rebuilt SD45s retired in favor of newer power. In the 2000s, stricter emissions standards took effect, and newer, more fuel-efficient and environmentally-friendly locomotives were being produced en masse. The few remaining SD45s, rebuilt or otherwise, were suddenly out of work. As of this writing, there are precious few remaining, mostly on shortlines.

Thankfully, there are several preserved SD45s. GN 400, aka Hustle Muscle, has been restored and is enjoying retirement at the Minnesota Railroad Museum. SP’s first SD45, SP 8800 was rebuilt as part of their in-house SD45 rebuild program and becoming became SD45R 7457 in the process. After a long career with SP, and a stint under merger partner UP, it was donated to the Utah State Railroad Museum in Ogden, Utah where it currently resides. Thankfully, it’s undergoing restoration back to its classic SP appearance. These are a few examples of SD45s that still exist for future generations to see and admire.
PRODUCT SUPPORT