These are the hallmarks of the Union Pacific Railroad’s unique GTEL 8500 Horsepower Turbine locomotives. Often called “Big Blows” because of their deafening noise, they roamed the less populated landscape between Council Bluffs, IA and Ogden, UT. 30 three unit sets were built between 1958 and 1961 and all were retired by the early 1970s. 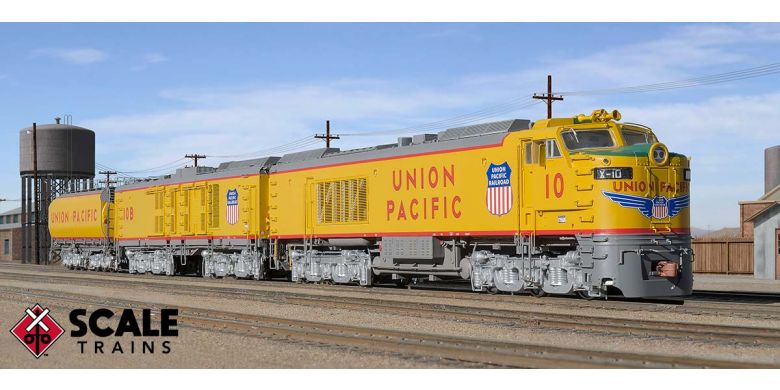 ** During DC operation, class lights illuminate in white. Access to other colors and the ability to change colors requires an ESU DCC decoder while operating in DCC

PRODUCT VIDEOS
PROTOTYPE HISTORY
Beginning in the 1950s, the Union Pacific Railroad sought higher and higher horsepower ratings from its locomotives to help move increasingly heavier and longer trains. Gas-Turbine Electric Locomotive (GTEL) technology promised much higher horsepower ratings over the diesel-electric locomotive designs of the time. General Electric (GE) and American Locomotive Co. (Alco) built the first GTEL design, a double-ended, 4,500 horsepower, B+B-B+B unit, delivered as UP #50 in 1949. This groundbreaking design would kick off the “Turbine Era” on the UP, which saw GE building successively larger and more powerful GTELs that would power UP’s hottest trains over the next two decades.

The basic principle of the GTEL saw a GE-designed and built gas turbine…essentially a type of jet engine…driving a generator that produced electricity, which was fed to traction motors on the locomotive’s axles. This design offered several advantages over more conventional diesel-electric locomotive designs of the era, particularly in horsepower. While competing cab and hood unit designs of the era boasted 1,500-1,750HP, the first GTELs boasted 4,500HP. Another advantage of the GTEL was it being designed to burn Bunker C heavy fuel oil, which, at the time, was much less expensive compared to conventional diesel fuel oil. GE would build successive batches of GTELs for UP, with each new design featuring improvements and design changes learned from experience from their predecessors.

All of those factors and lessons learned over the years would result in the ultimate GTEL design, the 8,500HP “Super Turbines” ordered in 1955. Indeed, design changes and technological improvements didn’t see the first of these units delivered until August 1958. These “C-C” (six-axle) units, numbered UP 1-15, with a second group, UP 16-30 also added to the order books, represented the pinnacle of the GTEL design from GE. Boasting 8,500HP, these units were built in a three-unit configuration, with an “A”, or Control Unit, which housed the operator’s cab, electrical control equipment, radiators, dynamic brakes, and a small 8-cylinder Bessemer-Cooper prime mover for hostling and auxiliaries. The semi-permanently coupled trailing “B”, or Turbine Unit, housed the heart of the machine: a GE 10-chamber centrifugal-flow gas turbine, coupled to a pair of 3,500HP electrical generators, which in turn powered all twelve powered axles under the pair of units.

While outwardly similar, there were a few external differences between the two groups; the first, UP 1-15, featured a “H-H” and “H-I” configuration on the dynamic brake housings of the A and B-units, so-called due to the appearance of the housing shape when viewed from above. The second group, UP 16-30, featured “H-I” and “I-I” dynamics as a spotting feature. However, this spotting feature would soon be rendered moot, due to several A and B-units between the two orders being swapped during maintenance.

Completing each set was a fuel tender trailing the B-unit, which held up to 24,000 gallons of Bunker C, which was heated by built-in electrical heater elements to keep the tar-like fuel in a viscous state. In an interesting melding of technology, the fuel tenders started out as steam locomotive tenders, salvaged and rebuilt from retired UP FEF-1 Northern and 4-6-6-4 Challenger steam locomotives. There were differences in how the tenders were (re)built; UP 1-20 were delivered with 24-C tenders, which featured insulation and a welded outer sheet metal jacket, giving them a smooth appearance. UP 21-30 were delivered with 23-C tenders, which had riveted construction and a body shorter in length in comparison to the 24-Cs. Eventually, tenders would be swapped between units as maintenance needs dictated, resulting in units originally equipped with 24-C tenders sporting 23-C tenders, and vice-versa.

The resulting 3-unit set (Control unit, Turbine unit, and tender) was massive, stretching almost 179 feet end-to-end, with the last unit, UP #30, delivered in June 1961. And their performance was impressive; put to work on UP’s Eastern District, they were commonly seen between Council Bluffs, IA, and Ogden, UT, hauling a variety of freight trains, frequently all by themselves. The deafening noise of their turbine engine and exhaust earned the Super Turbines the nickname “Big Blow”; so loud that UP reportedly restricted their operation in and around major cities due to noise complaints. Indeed, the City of Los Angeles was basically off-limits to the Big Blows and other GTELs after a few deafening visits in 1962. Nonetheless, the Big Blows made a name for themselves across the vast plains of Wyoming and Utah, often being heard from miles and miles out before they were even seen.

As with any other groundbreaking locomotive technology, in-service upgrades were implemented over their lifetimes to improve performance. In 1962, UP increased their rating to a whopping 10,000HP, which was subsequently dropped back down to their original 8,500 after a few years due to concerns of overloading their electrical systems. Many of the B-units were retrofitted with Farr-built “Dynavane” air intake systems for the turbine engine, resulting in a large, boxy structure jutting from the roof of the B-unit. Air requirements for the turbine were an issue early on, so much so that UP #30, the last unit built, came from GE with a one-of-a-kind intake system it would keep for its entire career. Horns on many were relocated from the operator’s cab roof (ironically due to crew noise complaints), to a location over the A-unit radiators, which also had the side benefit of keeping the horns from being fouled by snow and ice during winter.

Another visual change began appearing on many members of the fleet in 1962, which saw the original boxy diesel fuel tank under the A-unit replaced with a more angular high-capacity design, allowing for less-frequent trips to the fuel rack for the hostling engine. 1965 also saw the addition of Multiple-Unit, or MU equipment (additional pneumatic lines and electrical jumper connections), added to the rear of all but five of the B-units, allowing the Big Blows to operate in multiple with other locomotives.

Despite their outstanding performance, the Big Blows were to have relatively short careers. One of the contributing factors to this was rising fuel costs; the once-cheap Bunker C fuel oil the turbines were designed to burn, which refiners practically couldn’t give away early on, saw its price per gallon rise dramatically in the 1960s, eventually negating the fuel cost advantage the turbines enjoyed over their diesel-electric contemporaries. Rising maintenance costs compared to diesel-electrics also became an issue.

The turbine engines were complex pieces of machinery compared to a typical diesel prime mover, in particular the delicate turbine fan blades. These factors, along with advances in diesel-electric locomotive horsepower, and limitations on where the GTELs could operate, saw the first of the Big Blows, UP 1-4, retired in August 1968, after scarcely 10 years of service. Their numbers continued to dwindle over the last few years of the decade, with UP #7 holding the distinction of being the last Big Blow to operate, pulling its last train on December 26th, 1969. All were officially retired by February 1970, closing out the loud and exciting Turbine Era on the Union Pacific.
PRODUCT SUPPORT