Due to newer EPA regulations, EMD needed to redesign their successful SD70 series to comply with current emission standards. The SD70Ace was introduced in 2004 to meet the demand. The SD70Ace enjoyed wide acceptance from railroads large and small. You can find these units on short lines, regionals, and almost every Class I Railroad in North America.

The FVM model uses numerous variations of cabs, dynamic brakes, doors, grilles, trucks, etc. to get as close as possible to prototype units. FVM locomotives are now available as DCC with sound and DCC Ready versions. Learn more by clicking the “Product Details” tab below. 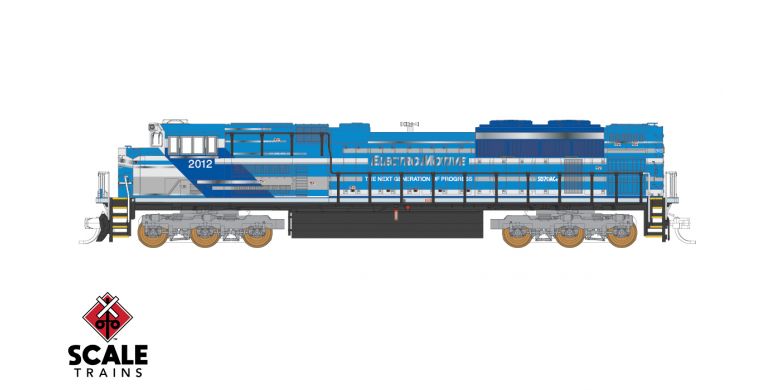 The SD70 series of locomotives were introduced by Electro-Motive in 1992. This was an attempt to regain market share from General Electric, the dominant locomotive builder at the time. GE continued to advance locomotive design from the Dash-9 series, into the AC4400 and current ES44 and ET44 series GEVOs. EMD’s answer was the SD70 (spartan cab) and SD70M (wide cab) models equipped with DC traction motors. From there, the SD70I was developed with an isolated cab to reduce noise and vibration for the crews. The SD70MAC was the final stepping stone into the world of AC traction motors.

Due to newer EPA regulations, EMD needed to redesign their successful SD70 series to comply with current emission standards. The SD70Ace was introduced in 2004 to meet the demand. The SD70ACe is equipped with EMD's 16-710-G3C-T2 prime mover which fires with 15% lower internal pressure to improve emissions. The body design is a cumulative effect of design improvements from previous models. This included the latest quite cab technology including isolated cabs, along with the flared radiator sections found on previous SD80MACs.

Although AC traction motors were the predominant choice, there was still a call for a conventional DC version of the new locomotive. The SD70M-s is the DC equivalent to the SD70Ace and was purchased by Norfolk Southern, Canadian National, EMD and CIT Financial, with units being leased to Florida East Coast. With retirements and sales, you can now find SD70M-2s on smaller railroads such as NYS&W and Vermont Railway.

The SD70Ace enjoyed wide acceptance from railroads large and small. You can find these units on short lines and regionals like Tacoma Rail, Northshore Mining, Quebec North Shore & Labrador, Arkansas and Missouri Railroad and Montana Rail Link. Class One railroads include Canadian National, CSX, Ferromex, Kansas City Southern, Norfolk Southern, and other units were manufactured for export. The largest fleets were built for BNSF and Union Pacific.

While emission standards will change and may affect future locomotive appearance, the SD70ACe that we know today should be around for years to come.